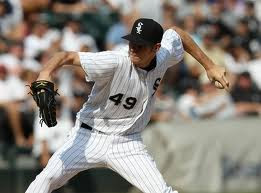 ESPN's Buster Olney and MLB.com's Scott Merkin both believe that Chris Sale is the likely favorite to become the Chicago White Sox closer in 2011. Bobby Jenks, the team's primary closer since 2006, recently signed a two-year contract with the Boston Red Sox. J.J.Putz, who may have been considered for the job, signed a free agent deal with the Arizona Diamondbacks.

When Jenks was benched at the end of last year's season because of injury, and which some claim ineffectiveness, the closing chores were shared between Sales and Matt Thornton. Both southpaws were effective, with Thornton picking up eight saves and Sale four. So who deserves to be the closer heading into the 2011 season?

The 22 year old Sale made his major league debut last season in the same year he was drafted. He was immediately regarded as Chicago's number one prospect. A starter in college, he pitched only 10.1 innings in the minors, all in relief, before being called up to the majors. With the White Sox he was dominant (12.34 K/9) while showing decent control (3.86 BB/9) in 23.1 innings, also in relief. He posted a 51GB/12LD/37FB line and ended with a stellar 1.93 ERA, 1.07 WHIP, and 2.74 FIP. These numbers all indicate an excellent skill set. There are, however, some questions. Will he be able to maintain his unusually high 87% strand rate, or .278 BABIP? And most of all, will he be able to maintain his 51% ground ball rate. If not, this can be a cause of concern, especially in the cozy confines of U.S. Cellular Field. He doesn't pitch low in the zone and his arsenal is one that is not conducive to producing many ground balls. He possesses a good fast ball that reaches 96MPH, a good slider, and a decent changeup. Sale does not have a smooth delivery, and some scouts believe his motion will cause undue stress on his elbow.

Matt Thornton turned 34 years of age in September. He is known for having only one pitch, an unbelievable fastball with great lateral movement that he throws 90% of the time. Thornton pounds the upper half of the zone with it, which jams right-hand batters up and in, and moves away from lefties. He throws it with suc 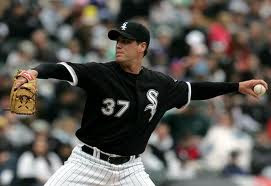 The question that Ozzie Guillen faces is whether he will trust the young Sale's lack of experience, or the elder Thornton's ability to maintain his heater's effectiveness. Who do you think will be the Chi-Sox closer in 2011?